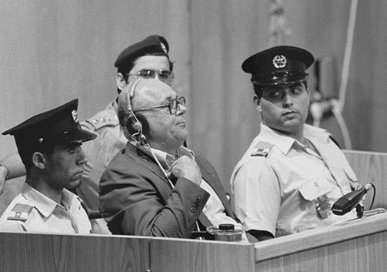 Ivan Demjanjuk – The Terrible from Treblinka

Ivan Demjanjuk (or Demianiuk eng. John Demjanjuk) known as Ivan the Terrible from Treblinka was one of the most mysterious characters connected with history of extermination camps. He was strongly believed to have been a guard in Treblinka extermination camp and he was notorious for his unusual cruelty in dealing with prisoners. During the first lawsuit of Ivan Demjanjuk, suspected of being Ivan the Terrible, witnesses testified that they saw when sadistic guard was quartering a women’s breast with a bayonet and forcing prisoners to rape young girls on his eyes. Unfortunately, after so many years they weren’t sure if Demjanjuk is the same person as Ivan the Terrible.

After the war Demjanjuk proclaimed himself a refugee and managed to emigrate to the USA in 1952. He settled in Ohio and together with his wife and three children had lived a peaceful life of an exemplary citizen for 25 years. Then he was deported to Jerusalem, where in his first lawsuit he was sentenced to death. He had spent 5 years in a death cell, but after the appeal he became acquitted because evidences against him turned out to have been forged. It was also difficult to prove him guilty since most witnesses had already died and the youngest one alive was 84 years old. Moreover, Demjanjuk was then 90 so his testimonies were not quite clear.

He was yet again deprived of American citizenship and deported to Germany in 2009 to be tried for participating in a murder of Jews in Sobibor concentration camp. Interestingly, the trial took place in Munich, where the III Reich was born, which seems to be very symbolic. In 2011, due to his advanced age, he was sentenced for murdering 28 000 Jews to 5 year imprisonment. Eventually, he was institutionalized in a nursery home in Germany where he was expecting another trial after bringing an appeal. He died there in March 2012 at the age of 91.

Some Evidence Against Ivan Demjanjuk

There are some evidences that Demjanjuk was a guard in Sobibor. However, he stated that he was only an Ukrainian POW. We need to remember that for many Soviet or Jewish POWs joining German guard companions was an only chance of survival for a few more months. There were Jews who, in desperation to survive, became German policemen or members of so called “Judenrat”. Domieniuk might have been one of them. He was the last living man suspected for war crimes. The question is: even if he was a cruel beast from Treblinka, hadn’t this old sick man already paid with all those years when he had to hide and feared for his worthless life or that he spent under false charges in a death cell? Nothing can bring back the lives of thousands people murdered.

One thought on “Ivan Demjanjuk – The Terrible from Treblinka”