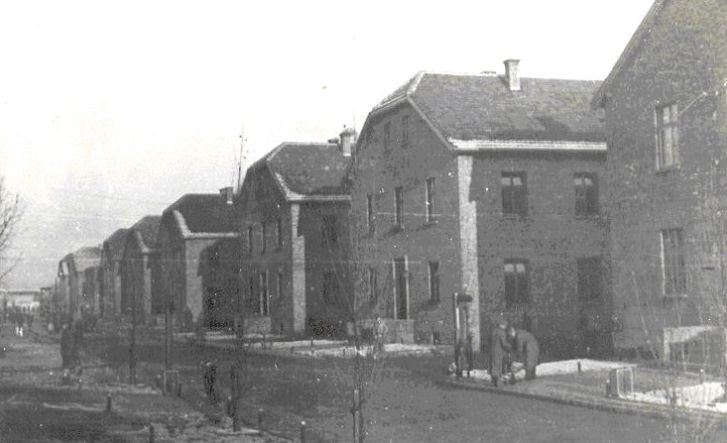 Life in the camp

During the first several months, the prisoners’ rooms had neither beds nor any other furniture. Prisoners slept on straw-stuffed mattresses laid on the floor. After reveille in the morning, they piled the mattresses in a corner of the room. The rooms were so overcrowded that prisoners could sleep only on their sides, in three rows. Three-tiered bunks began appearing gradually in the rooms from February 1941. Theoretically designed for three prisoners, they in fact accommodated more. Aside from the beds, the furniture in each block included a dozen or more wooden wardrobes, several tables, and several score stools. Coal-fired tile stoves provided the heating.

In the first months, the prisoners drew water from two wells and relieved themselves in a provisional outdoor latrine. After the rebuilding of the camp, each building had lavatories, usually on the ground floor, containing 22 toilets, urinals, and washbasins with trough-type drains and 42 spigots installed above them. The fact that prisoners from the upstairs and downstairs had to use a single lavatory meant that access was strictly limited.

Two types of barracks, brick and wooden, housed prisoners in the second part of the camp, Birkenau. The brick barracks stood in the oldest part of the camp, known as sector BI, where construction began in the fall of 1941. Inside each of them were 60 brick partitions with three tiers, making a total of 180 sleeping places, referred to as “buks,” designed to accommodate 4 prisoners. The SS therefore envisioned a capacity of over 700 prisoners per block. At first, the buildings had earthen floors. Over time, these were covered with a layer of bricks lying flat, or with a thin layer of poured concrete. The barracks were unheated in the winter. Two iron stoves were indeed installed, but these were insufficient to heat the entire space. Nor were there any sanitary facilities in the barracks. Only in 1944 were sinks and toilets installed in a small area inside each block. Nor was there any electric lighting at the beginning.

Wooden stable-type barracks were installed in segment BI, and above all in segments BII and BIII. These barracks had no windows. Instead, there was a row of skylights on either side at the top. A chimney duct, which heated the interior in the winter, ran almost the entire length of the barracks. The interior was divided into 18 stalls, intended originally for 52 horses. The two stalls nearest the door were reserved for prisoner functionaries, and containers for excrement stood in the two stalls at the far end. Three-tier wooden beds or three-tier wooden bunks intended for 15 prisoners to sleep in were installed in the other stalls, for a total capacity of more than 400 prisoners per barracks. 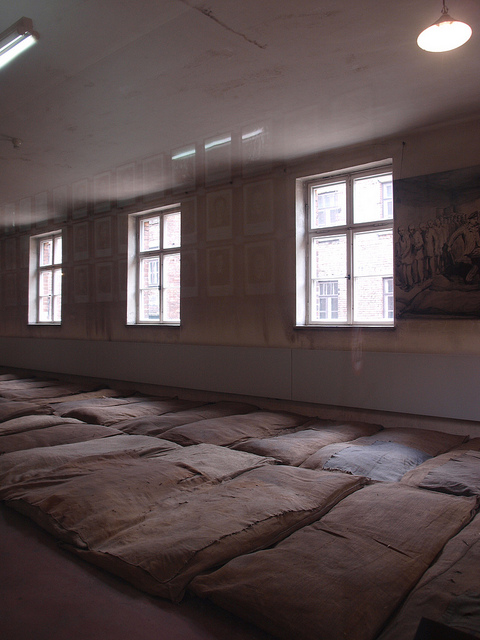 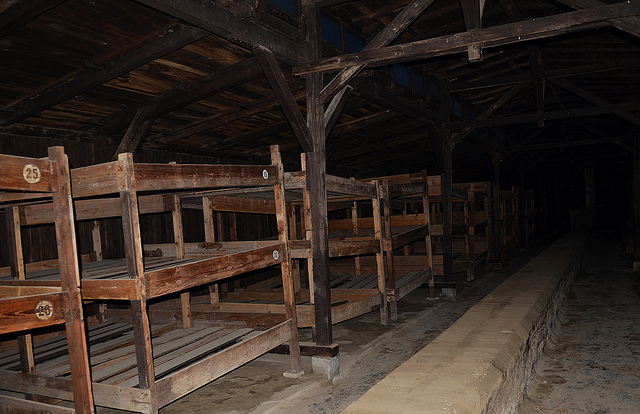 In the brick blocks, prisoners slept on straw strewn on the boards of the buks; paper mattresses stuffed with so-called “wood wool” were placed on the beds or bunks in the wooden barracks.

The number of prisoners that the barracks were supposed to hold should be treated as only a starting point, since the actual number was often much higher. It varied according to the size and number of transports arriving at any given time.

During the first year or so, water in sector BI was available only in the kitchen barracks, and prisoners had no access to it. Unable to wash, they went around dirty. They had to perform their bodily functions in unscreened outside privies. The barracks were frequently damp, and lice and rats were an enormous problem for the prisoners. It is therefore hardly strange that epidemics of contagious diseases erupted frequently. Sanitary conditions improved to a certain degree in 1943, when each part of the camp was outfitted with a bathhouse and equipment for disinfecting clothing and linen. Nevertheless, the capacity of these facilities in proportion to the number of prisoners limited the possibilities for making use of them. In sector BI, for instance, there were 4 barracks with sinks for washing (90 spigots per barracks), 4 toilet barracks (a sewer with a concrete lid that had 58 toilet openings in it), and 2 barracks containing toilets and sinks—for a sector containing 62 barracks housing prisoners. The prisoners also had limited opportunities for bathing. Additionally, they had to undress in their own barracks before doing so and, regardless of the weather, walk naked to the bathhouse. For many prisoners, this led to sickness and death.

The order of the day

The working day began at 4:30 in the summer and 5:30 in the winter. The prisoners got up at the sound of a gong and carefully tidied their living quarters. Next, they attempted to wash and relieve themselves before drinking their “coffee” or “tea.” At the sound of a second gong, they ran outside to the roll-call square, where they lined up in rows of ten by block. The prisoners were counted during roll call. If the numbers did not add up, roll call was prolonged. This could be especially tormenting for the prisoners, particularly in bad weather. Finally, the order came to form up by labor details. The prisoners walked out to working groups, with musical accompaniment in the form of marches played by the camp orchestra.

Prisoners laboring in places several kilometers distant did not participate in the roll call—they left for work earlier. Nor did the prisoners from such internal labor details as the hospital, kitchen, or orchestra attend roll call. Morning roll call was abolished in February 1944, in order to maximize the time spent laboring. From then on, the second gong was a signal to form up by labor details.

Prisoners performed various kinds of labor inside and outside the camp boundaries. From the end of March 1942, the minimum working day numbered 11 hours. This time was extended in the summer and shortened in the winter. The break for the noon meal lasted from 12 until 1 o’clock. Depending on the time of year, it might be extended to 2 hours or shortened to half an hour. In the early days, a roll call followed the noon meal, but this was abandoned over time.

Prisoners returned to the camp under SS escort before nightfall. They frequently carried the corpses of those who had died or been killed while laboring. The evening roll call began at 7 o’clock and, as in the morning, could be prolonged by discrepancies in the number of prisoners. After roll call, the prisoners received their evening bread with its accompaniment. They had free time after the evening meal. Until the first gong, the signal for everyone to return to their quarters, prisoners waited their turn for the washrooms and toilets. They could also receive mail (and, after 1942, parcels) or visit acquaintances in other blocks. The second gong, at 9 o’clock, announced the nighttime silence.

Prisoners did not have to labor at all on Sundays and holidays, which they spent tidying up their quarters, mending or washing their clothes, or shaving and having their hair cut. They could also attend concerts by the camp orchestra and, every other week, send official letters to their families. 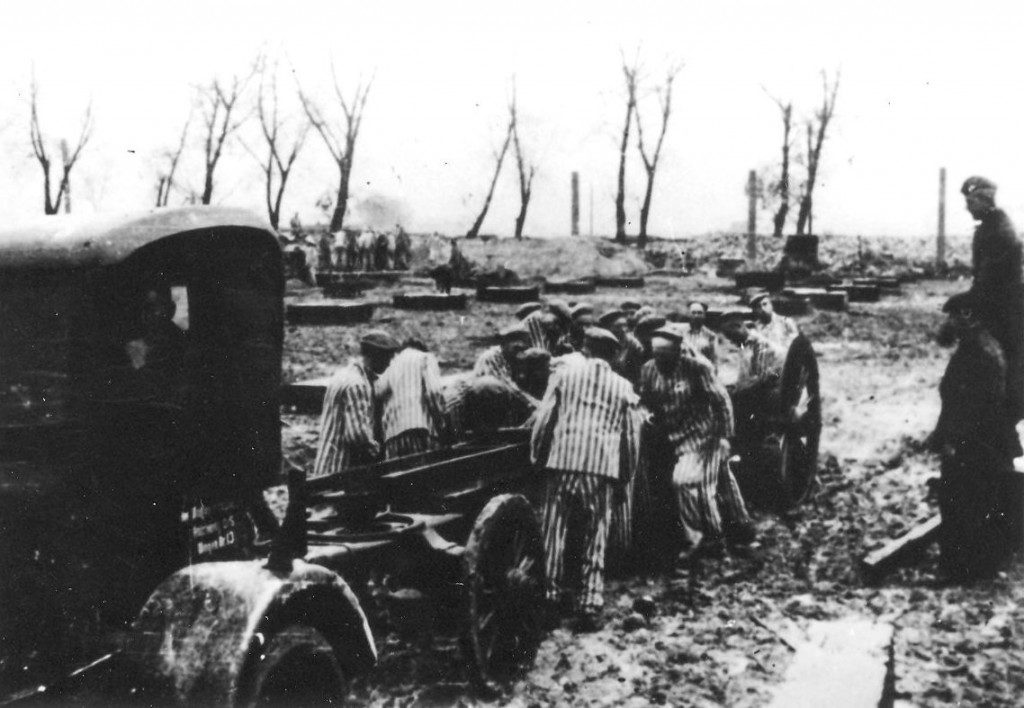 One thought on “Life in the camp – KL Auschwitz living conditions”