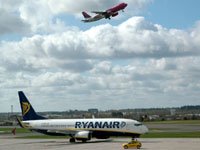 Planes at the Gdansk Airport

Civil aviation started in Gdansk after the World War I and in 1920s Gdansk Airport was transformed into an international airport, also servicing transit flights.

As the third largest airport in Poland it serves as an auxiliary airport for Warsaw.

The airlines that are flying from the Gdansk Lech Walesa Airport: Norwegian, Ryanair, Wizz Air, Lufthansa.

There is also ability to get there by taxi or car.