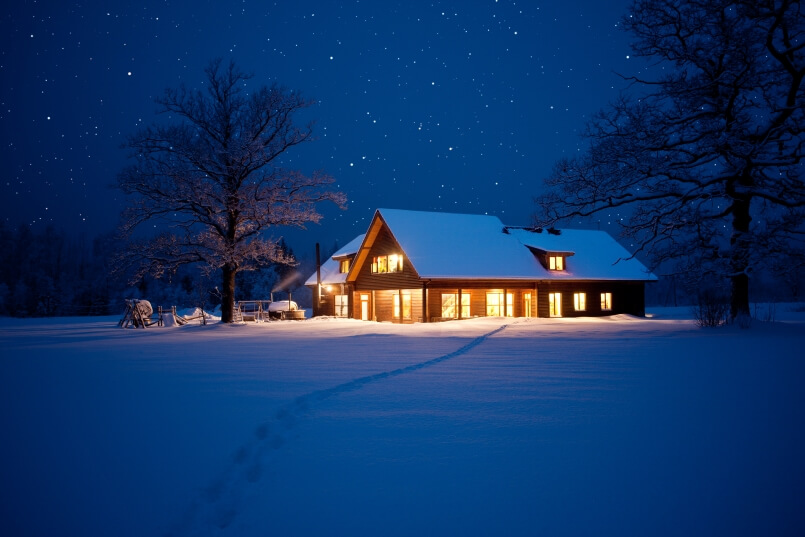 The smell of tangerines, snow, carols on the radio and incredible crowds in the supermarkets – these are the signs that Christmas is approaching!
Even though 24th December is a working day, it is regarded as the most important one during Christmas in Poland. Many institutions stop working earlier as in the evening of 24th December, the whole family gathers together to have Christmas Eve supper, which is known as ”kolacja wigilijna” or, simply, ”Wigilia”. Traditionally, the house is cleaned thoroughly and everyone wears their Sunday best.

25th December and 26th are public holidays in Poland.

Poland, as a largely Catholic country, takes Christmas very seriously. Polish traditions are uniquely distinctive, that is why we would like to tell you all about them!

1. Waiting for the first star in the sky

Many Poles wait until the first star appears in the sky before sitting down to eat family dinner on 24th December. This tradition commemorates the Star of Bethlehem, which guided the Wise Men to the birthplace of Jesus Christ. 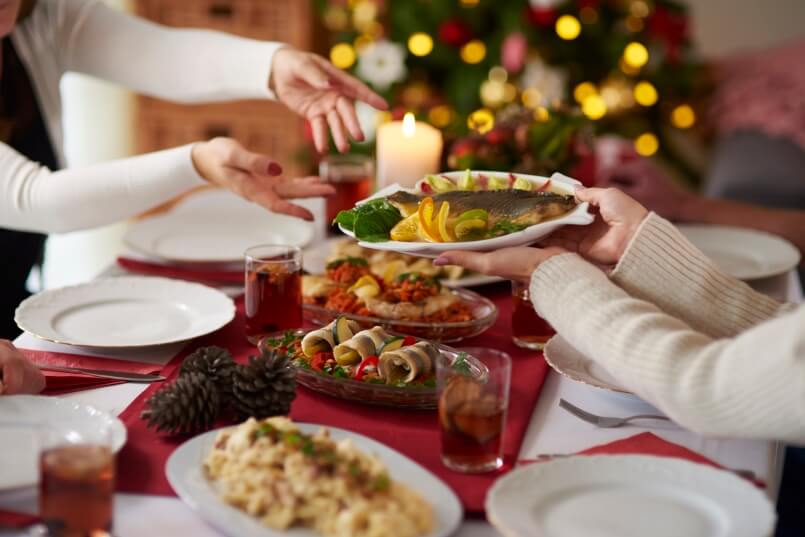 A traditional Polish Christmas Eve dinner consists of 12 dishes. Each meal is suppossed to give you good luck for the upcoming 12 months. Some people claim that one should try every dish to make sure the upcoming twelve-month period will be happy for you! Also, for Catholics, the 12 dishes symbolize Jesus’ 12 disciples.

What is more, all of the meals eaten during Chsirtmas Eve supper are traditionally meat free – this is to remember the animals who took take of baby Jesus in the stable.

One of the most important dishes is borsch (beetroot soup) and it’s obligatory to try it! The borsch is usually eaten with “uszka” (little dumplings with mushrooms).

Carp is often the main dish of the day as well.The fish itself is traditionally bought a few days earlier alive and it swims in the bath (if you have one) until it’s killed! However, nowadays, most people buy fillets of carp instead.

The carp’s scales are said to bring luck and fortune and, by some, are kept for the whole year in their wallets! What a strange tradition, huh?

“Bigos” is another traditional dish – it can be eaten either hot or cold. It’s made of cabbage, sausage and some people add dried plums. It is usually served on 25th or 26th December as it has meat in it.

Herrings are also very popular and these usually are served in several ways: in oil, in cream or in jelly.

In most houses, there is also a drink called “kompot z suszu” (dried fruit compote).

The most popular Christmas cake is “makowiec” – a poppy seed cake. Some people prepare “kutia” – mixed dried fruits and nuts with wheat seeds or “piernik” (gingerbread) – a moist cake made with honey. It smells… just insanely good! 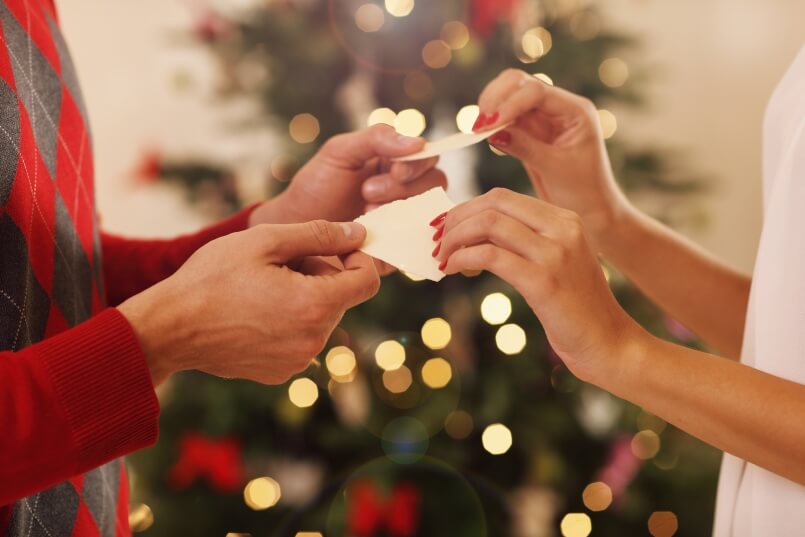 Opłatek is a wafer made of flour and water, usually presenting a religious image. Every person gets one and then shares pieces of it with everyone at the table. Sharing the wafer is accompanied by exchanges of good wishes.The tradition of sharing wafer is linked to breaking of bread at the Last Supper.

4. Leaving one empty seat at the table 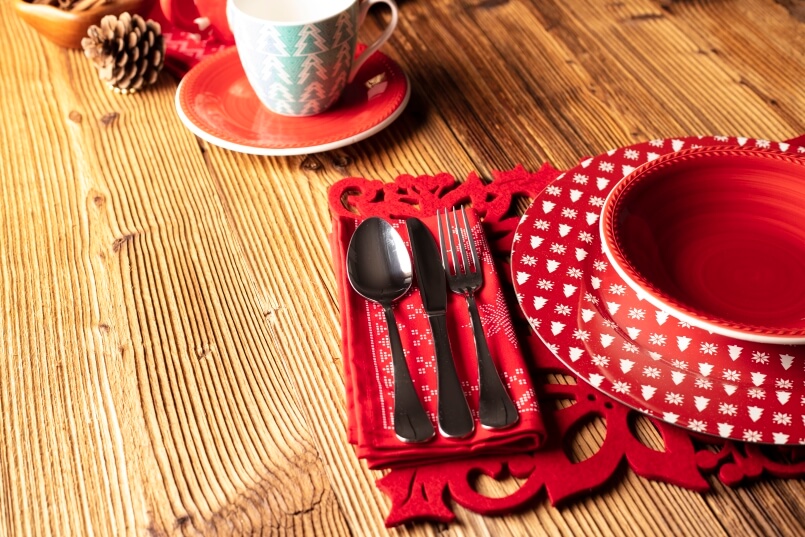 A place is often left empty at the table for ”an unexpected guest”. Polish people say that no one should be alone or hungry on that special day, therefore, if someone unexpectedly knocks at the door – they are welcomed. While this rarely happens nowadays, the tradition requires greeting strangers and treating them as family – and that is what Polish people do!

5. Putting hay underneath the tablecloth 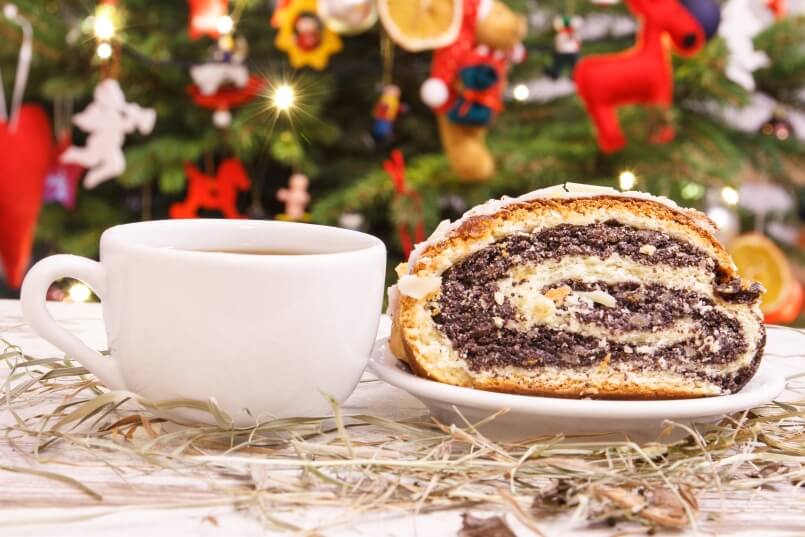 If you find some hay beneath the tablecloth at a Polish Christmas Eve celebration, don’t assume that your hosts are strange!The hay is put there on purpose as, according to the Bible, Jesus was born in a stable, on hay. 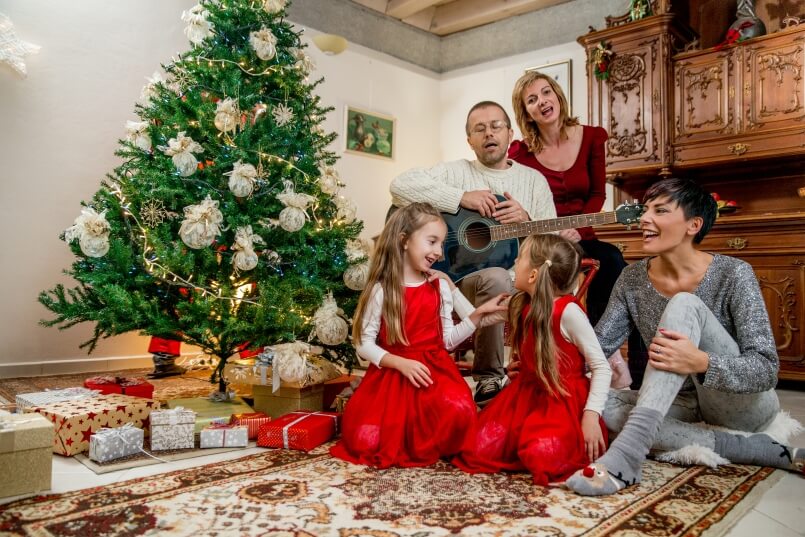 There are very many carols sung in Poland! Among the most popular ones are “Wśród nocnej ciszy” (Within nights silence), ”Cicha noc” (Silent night),”Bóg się rodzi” (God is born), “Lulajże Jezuniu” (Sleep baby Jesus) and “Dzisiaj w Betlejem” (Today in Bethlehem). The oldest carols date back to medieval times! 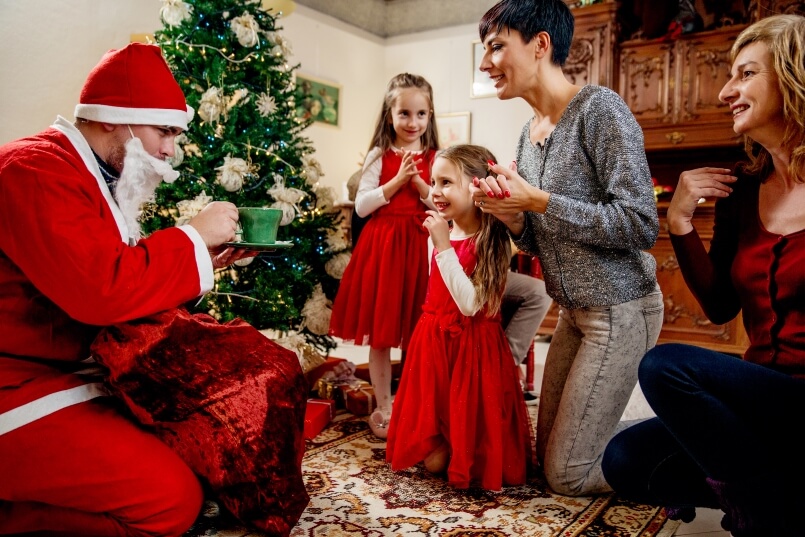 Right after Christmas supper comes the most exciting moment (not only to the youngest!) – people exchange Christmas presents. However, traditionally, the presents are brought to people by “Święty Mikołaj” (St Nicholas/Santa Claus) – but only if you have been good!) BEWARE! If you haven’t, Santa Claus may give you “rózga” – a birch-rod!

8. Attending the Mass at midnight 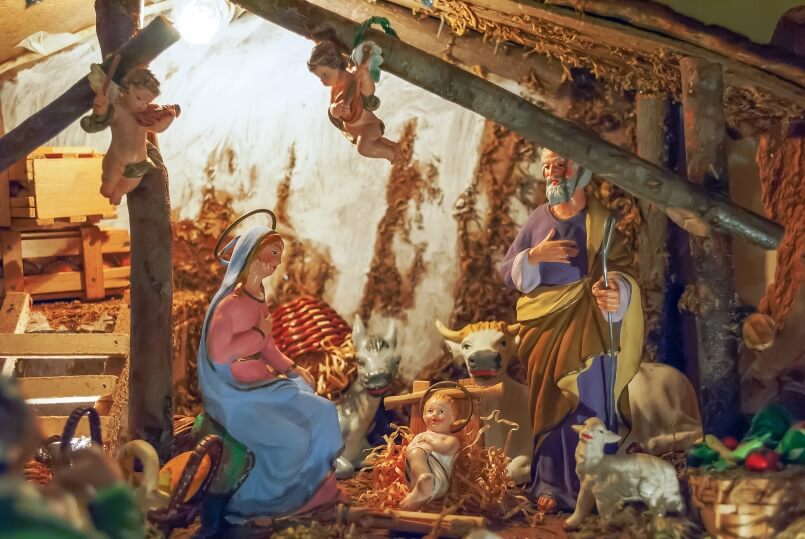 Christmas Eve is finished when the whole family goes to Church for a Midnight Mass service (midnight between 24th and 25th December). It commemorates the prayers of the shepherds who were on their way to Bethlehem. This is one of the most important Polish traditions and religious celebrations. 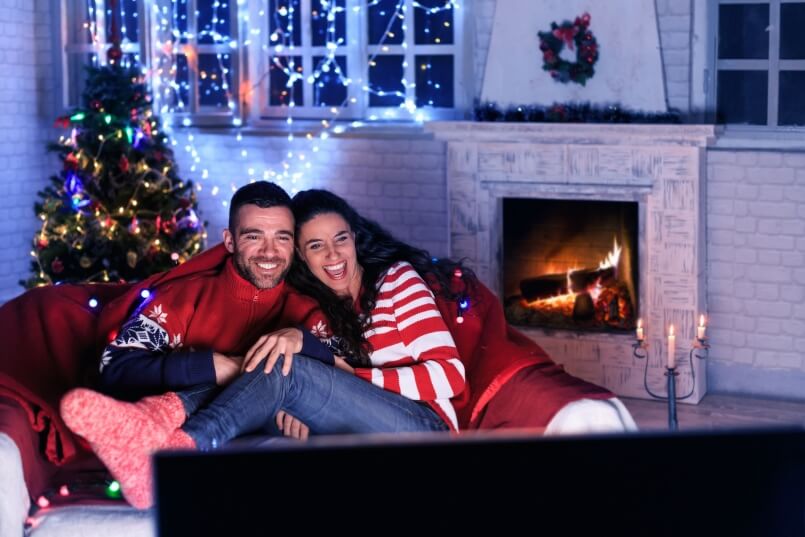 A veeeery popular film to watch in Poland over Christmas is ‘Home Alone’. In Poland, it is called ‘Kevin Sam w Domu’, which means – ‘Kevin is Alone in the House’. In 2010, when Poles got the information that it won’t be on TV, so many people complained that… it was put back on! So… we believe that it deserved to be listed here. 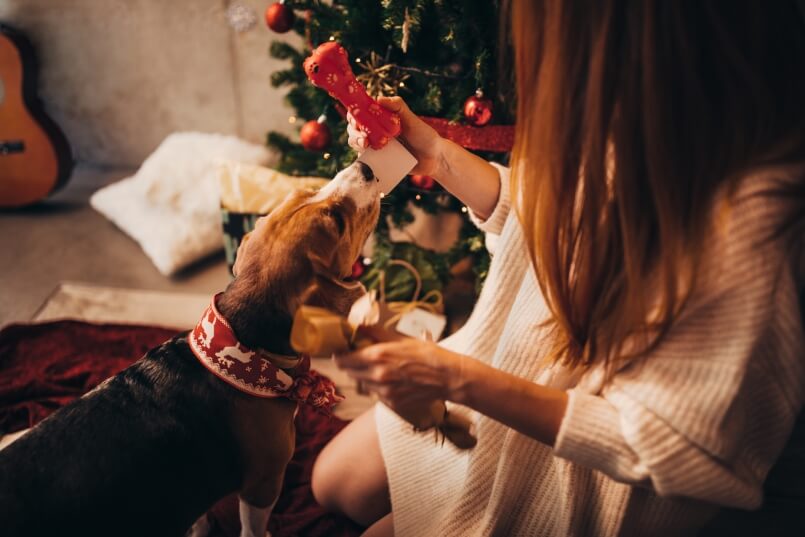 According to an old Polish legend, animals are granted the gift of speech on Christmas Eve to honour their role in welcoming Jesus on Earth. So, don’t be surprised if, after midnight, Polish people will try to talk to their pets… They are not insane (or drunk). 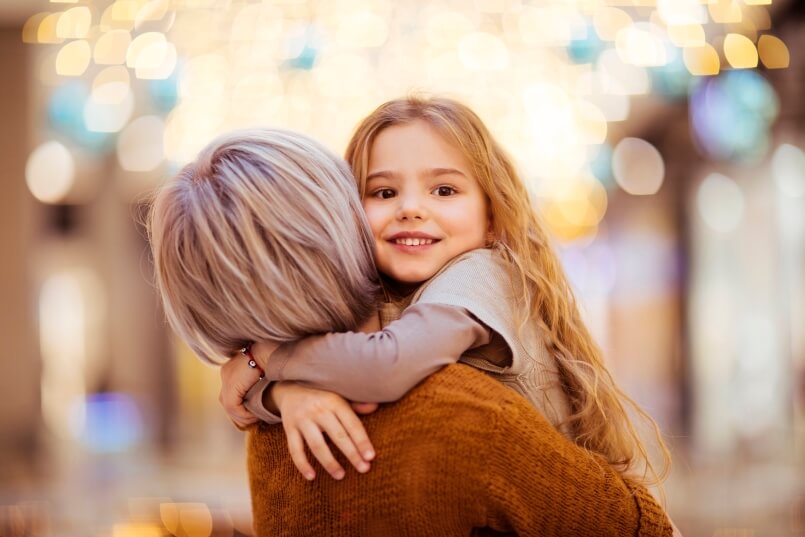 In Polish, Merry Christmas is ‘Wesołych Świąt’! You better know this phrase as everyone will be using it during Christmas!

And lastly – should you celebrate it – wishing you all very merry Christmas and a happy New Year!

If you have ever experienced Christmas time in Poland – let us know about this! Did you know all of these Christmas traditions? Let us know!