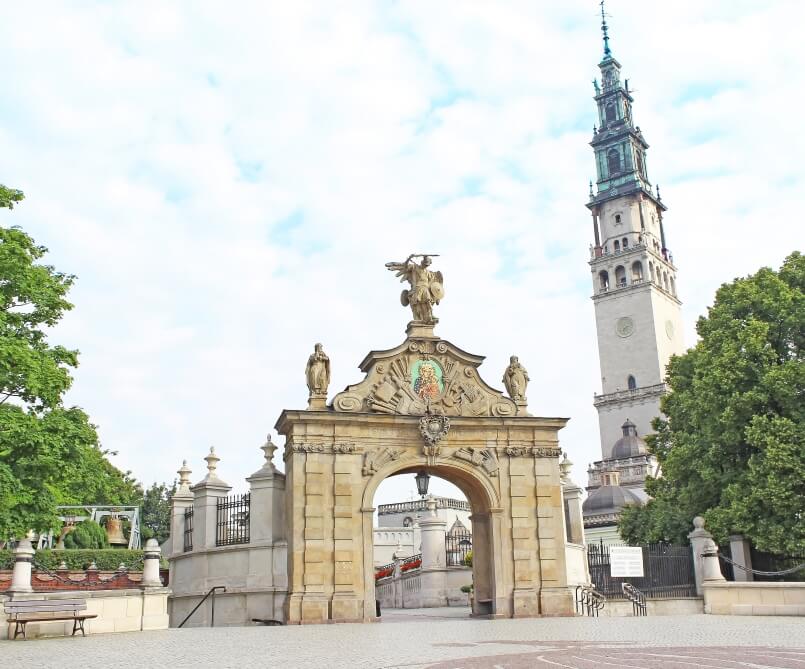 Of course, these two are the city’s most recognizable and valuable symbols admired by roughly 4 mln pilgrims and tourists yearly. We’ll tell you all about them but we just can’t leave out other great spots Częstochowa hides up its sleeve. Did you know that Czestochowa has the Museum of Match Manufacturing and the Miniature Park of Sacral Monuments with a gigantic statue of John Paul II? The city encourages strolling around its narrow charming streets and majestic avenues like the Holy Virgin Mary Avenue leading up to the Jasna Gora Monastery.

The city set hundreds of kilometres away from civilization? That’s definitely not Częstochowa.

This holy city is situated in southern Poland in the Silesia region close to major Polish cities. If you go by car, you shouldn’t drive longer than 2 hours from Krakow, 2.5 hours from Warsaw, and 3 hours from Wroclaw. On your way from Krakow, you’ll have a chance to see the ravishing Kraków-Częstochowa Upland. Despite the city’s remarkable location, many people fail to pay a visit.

If you’re not hiring a car in Poland, you can easily get there by Flixbus, a PKP train, or with the help of a travel company.

Historians agree that the painting was brought to Jasna Gora in the 14th century. Legend has it that the Black Madonna miraculously saved the monastery of Jasna Góra in 1655 when the Swedish forces invaded and surrounded the monastery. Merely 70 monks and 180 local volunteers confronted and held off 4,000 Swedes for 40 days. They managed to save the sacred painting and, as some say, turn the course of the war. King John II Casimir Vasa appointed the Black Madonna as the Queen and Protector of Poland.

Standing 106 meters high, Jasna Góra Bell Tower overlooks the entire city and the surrounding villages. The top will definitely reward you with one of the best views in the southern part of Poland. On a clear day, the view will please your eyes with a nearly perfectly straight avenue adorned with rows of green trees and a panorama of stunning Polish countryside with medium-size hills.

Catholics from all over the world finish their pilgrimage at the monastery’s feet with a mass in the Chapel of the Virgin at Jasna Gora. The most pious and devoted believers venture on foot for hours or days praying along the way and hoping to have enough strength to reach the place of worship. It is believed such sacrifice will protect them from bad health and misfortunes.

The monastery is loaded well-preserved, tidy narrow alleys and secret nooks and crannies that are definitely worth a walk. Surrounded by solid fortifications, Jasna Gora boasts several howitzers that remind passersby about the earlier-mentioned 17th-century Swedish siege.

Jasna Góra with the monastery and the Black Madonna icon is inarguably the pride of Częstochowa and its most recognizable symbol. As popular as it is, Jasna Góra is just a tip of Czestochowa’s iceberg. In fact, the city has much more to offer.

Except for Jasna Góra, Czestochowa’s Miniature Park is one of the most popular attractions in the entire city. There, you will not only see the world’s largest John Paul II’s monument but also other important religious mini reproductions of the Basilica of Our Lady of the Rosary in Fatima, The Church of the Nativity in Bethlehem, or Cathedral, or square and colonnade in Rome among many others. The youngest ones will also enjoy their time in the park thanks to the variety of attractions such as a ropes course, cinema 5d, and a race track.

Climb down to the Museum of Iron Ore Mining

Częstochowa was the centre of the country’s iron ore mining industry for centuries. To preserve the memory of the generations of miners that worked underground, the city officials established a museum in 1968 that prospers until this day. The exhibitions familiarize visitors with mining techniques, and collections of winding equipment, roof support systems, tools, locomotives used underground, drilling and face-cutting machinery, lighting and ventilation systems, and mining maps. Thanks to the underground displays, visitors will gain a deeper understanding of conditions that past generations of iron ore miners had to work in.

The factory in Częstochowa produced matches from 1881 and 2010 and was the first of its kind in Poland. The museum opened in 2002 and 8 years later was put on the national register of historic monuments. In its glory days, 140 employees per shift produced 1 400 000 matches and 500 000 boxes per hour! Impressive, isn’t it? In the museum, you’ll feel as if the production stopped right before your visit – assembly lines are still loaded with unfinished matches and boxes. As you continue sightseeing, you’ll see a small gallery with box models and tiny pieces of art made from matches. If you’re a cinema enthusiast, you can see a film about the factory at the height of its prosperity.

Jasna Góra Monastery marks the beginning of the Holy Virgin Mary Avenue lined with cafés, bars, restaurants and shops with prices much more attractive than in Krakow or Warsaw. If you’re a shopping or food lover, you will definitely find something for yourself. Along the way, you will see the City Hall and many other Catholic churches. If you’re a street art fan, you will love the Babel Tower mural situated close to the St. Jacob’s Church. As you slowly walk down the boulevard, look back at a splendid view of the majestic Jasna Gora hill towering over the city.

Even if you’re not renting a car, you can easily reach the castle in Olsztyn using suburban buses in less than 30 minutes. And going there is so so worth it! Except for the ravishing natural monuments, you will see the remaining ruins of the Castle Olsztyn. But you haven’t driven all the way from Czestochowa just to see a castle, right? In Olsztyn, you can climb up the hill and walk among the centuries-old castle walls.  From here, you will see the ever-spreading fields of lush greenery and the remarkable view of the holy city.

As you can see in the above list, Częstochowa is not only the heart of religious life in Poland. On the contrary, it boasts many other phenomenal places that can hardly be found anywhere else. It’s also a perfect city for a short 1 or 2-day weekend break, which should be enough to get a feel for the city and see its most famous spots.