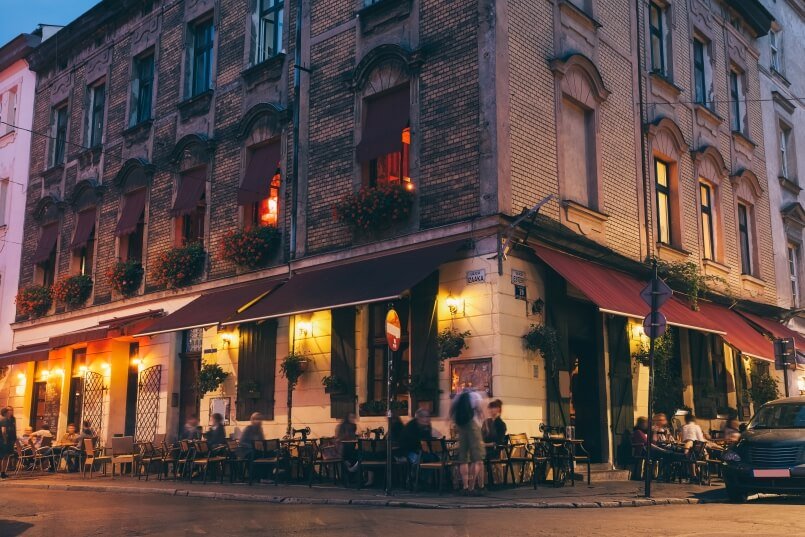 Even though its streets and architecture may seem to be a bit run-down and neglected, Kazimierz has its own irreplaceable atmosphere that can hardly be compared to any other place in Poland. The Jewish Quarter in Krakow boasts countless symbols of the Jewry, that lived on its premises. Having worked principally in such areas as banking, merchandising, gastronomy, and craftsmanship, the local Jews peacefully developed their community before it was abruptly brought to an end following the outbreak of World War II – the most poignant and dramatic time for the Krakow Jews.

Jews arrived in Kazimierz in the mid-14th century, when it was yet a separate town. We can risk saying that they were the ones who created Kazimierz from the beginning of its times. They built several synagogues, owned shops, restaurants, and bars, and worked hard chiefly as bankers and merchants. The Jewish community was strictly devoted to their cultural and spiritual life, following the religious rules set by rabbis and spending time on prayer in synagogues.

Their harmonious existence was brutally interrupted by Nazi Germany that displaced Jews from Krakow at the beginning of the war. In 1941, the Nazis established a ghetto isolated from other parts of Krakow, where Jews crammed in small apartments, left with almost no help at all. Famine, disease, and death swept across the entire ghetto. The survivors, stripped out of honour and hope, were hauled away to death camps where they struggled to stay alive. Nazis had no respect whatsoever towards Jewish culture and architecture. Many synagogues and age-old cemeteries were consequently being destroyed or transformed into horse stables and storehouses.

As many would expect, the outcome of such inhumane treatment was tragic and painful. Out of 64 000 Krakow Jews, roughly 3000-4000 withstood the atrocities of war – many of them thanks to the war hero Oskar Schindler.  A majority of them never came back to Poland. The remaining tiny community of Jews reconnected with their roots and settled in Kazimierz to recreate the destroyed heritage and culture of their ancestors.

After the fall of communism, the long forgotten Kazimierz began to get a well-deserved appreciation from both local authorities and tourists. First bars and restaurants, now counting in hundreds, were opened. People started to rediscover the revitalized synagogues and the symbols of remaining Jewish culture. It is now one of two famous areas in Krakow frequented and admired by visitors from all around the world.

One of the most characteristic and awe-inspiring constructions in Krakow, which combines Romanesque, Gothic and Baroque styles. A phenomenal piece of architecture, where everyone will find something interesting for themselves. The church’s construction started in 1340 and was commissioned by King Casimir III the Great.

Since the early 1900s, the local market at Plac Nowy has been one of the busiest parts of Kazimierz. Throughout the week, the visitors to Plac Nowy will have a chance to haggle over antiques, craft, and trinkets with metal stalls owners. At the weekend, farmers set up their stalls to sell delicious fresh produce. While there, you will definitely see the Okrąglak in the very centre of the square, where you can dine on zapiekanki – baked open-face sandwiches with toppings considered the best in the entire country.

This museum honours Jewish fallen in the Holocaust and pays tribute to the Jewish culture, tradition, and history. It boasts a remarkable photographic exhibition of a thriving pre-war Jewish community and a video testimony of survivors along with temporary exhibits. In the adjoining garden, you will find a gigantic mural of Irena Sandler (Righteous Among the Nations) and Marek Edelman (leader of the Warsaw Ghetto Uprising).

Built in honour of the family of Rabbi Moshe Isserles in the 1550s, this is Krakow’s smallest and most active synagogue. Religious services are held here every week during Shabbat. Even though the adjacent cemetery was devastated and only several tombstones survived World War II, it can still be seen during your visit to the synagogue.

One of the oldest functioning bars in Kazimierz ideally reflecting the charm and atmosphere of its surroundings and situated close to Plac Nowy with famous zapiekanki. The bar’s dimly lit interiors, bedecked with various vials and glass pipes filled with alcoholic and non-alcoholic beverages, resemble a genuine alchemist’s workshop. Music enthusiasts will be delighted with regular evening concerts hosted in the cellar. In summer, visitors can lounge outside in the adjacent garden and enjoy warm sunny days.

During the war, it was the largest open space in Krakow Ghetto, where the mass deportations to the death camps, beatings, and slaughter were carried out. Today, 33 gigantic and 37 regular chairs from iron and bronze constitute a symbol of the atrocities and emptiness the ghetto inhabitants left behind.

If you want to feel the pre-war spirit of Kazimierz, head to Szeroka street loaded with well-preserved quaint shops and restaurants with emphasis on Jewish traditions. First residents in Kazimierz settled around here in the fourteenth century. Around here, you will find two synagogues – the Old Synagogue (the oldest in Poland) and Remuh Synagogue.