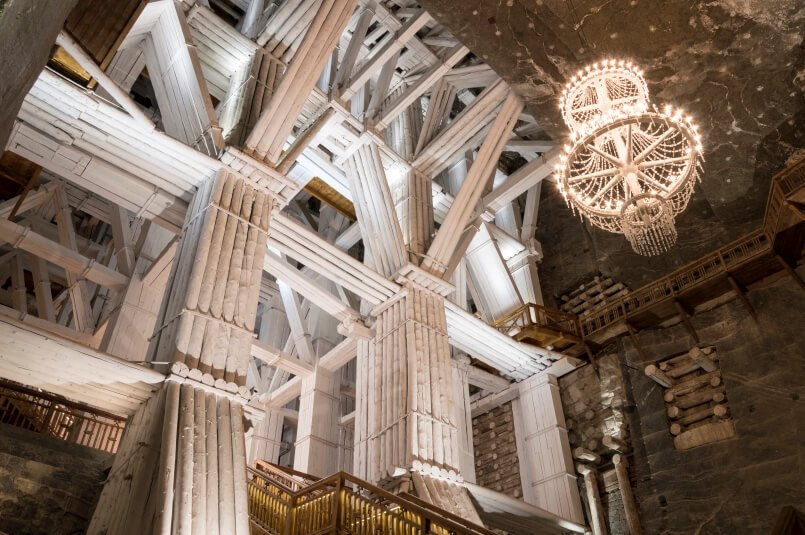 An underground UNESCO treasure near Krakow

One of the world’s oldest salt mines, which operated ceaselessly for over 700 years, attracts nearly 2 mln travellers annually. Its beautifully lit up tunnels leading the way to awe-inspiring chapels and saline lakes combine into a nearly 300-km-long labyrinth of remarkable subterranean scenery. Since 1978, the salt mine has been a proud member of UNESCO, which appreciated the miners’ dedication and authenticated its undeniable significance to the world’s heritage. Even though barely 1% of the complex is prepared for sightseeing, the time you’re going to spend underground will definitely leave you speechless.

A quick look at 700 years of the mine’s spectacular history and some super fascinating facts.

Approximately 20 million years ago, Krakow and the encircling area were based at the bottom of a salty sea. Once it dried, tectonic movements relocated gigantic salt deposits hundreds of meters underground which remained uncovered until the 13th century. The first people to unearth the endless amounts of the mineral deposits were arguably the local miners, who produced salt table until 2007 when the mine became fully dedicated to tourism. Massacred after the barbarian Tartar invasions in the 13th century, Krakow sought for money to recover and found more than enough in Wieliczka Salt Mine, which provided 30% of the entire kingdom’s income in the times of Casimir III the Great – one of the most glorified and accomplished Polish kings. In that time, spectacular statuettes of dwarves, religious figures, and finest Polish rulers began to emerge thanks to the generations of gifted miners, who delivered hundreds of jaw-dropping works of art. Throughout the centuries, the miners modified some of the chambers into chapels bedecked with the earlier mentioned stunning church iconography. Even though the miners were so deep underground, they also raised majestic altars to connect with God up in the heavens. One of their most wondrous creations is unquestionably the Chapel of St. Kinga. Nested approximately 101 meters below the surface, the crown jewel of the Wieliczka Salt Mine is the world’s biggest church built underground. Its worldwide renown prompted many celebrities to visit – some of them are Barbara Hendricks, George H.W. Bush, Danny de Vito, Nicholas Copernicus, Fryderyk Chopin, Karol Wojtyła, and Bill Clinton among others.

The most frequented route in Wieliczka has been visited by over 44 mln tourists from all corners of the world. 800 steps to climb don’t discourage visitors from exploring roughly 3 km of winding corridors – quite the opposite – they probably know that these corridors lead to unique subterranean saline lakes or stunning chapels and chambers embellished with ravishing masterpieces chiselled out in rock salt. Along the way, a certified guide will share with you the mine’s intriguing history and tell you some of its mesmerizing secrets. One of the route’s highlights is a light and sound show accompanied by the music of Chopin on the shores of a crystal clear saline lake.

Only for real explorers craving for a splendid and memorable adventure, the miners’ route gives a remarkable opportunity to learn the nuts and bolts of the work in the mine. Dressed in genuine workwear and carrying mining equipment, you’ll transform into an amateur miner who digs and transports salt, measures the level of methane, and investigates hidden chambers – depending on the kind of job you’re assigned to. Of course, the life of a miner is not all about work – you will also find out about the miners’ everyday routine as well as about their fascinating rituals and traditions.

A real treat for Christians and those interested in strongly religious and pious lives of the miners, who spent an enormous amount of time underground to work and worship God by decorating interiors with stunning works of art. If you want to take a look at the majestic Wieliczka Salt Mine from the spiritual viewpoint, this trail seems to be a perfect choice. First stops of the route will expose you to glorious statues in the chapel of St. Anthony and the wooden Way of the Cross, known as the Golgotha of Wieliczka’s Miners. To crown your pilgrimage, the guide will take you to the Chapel of St. Kinga bedecked with magnificent altars, a remake of Leonardo da Vinci’s Last Supper, a carved pulpit, and the world’s only statue of John Paul II made of salt. At the end of your visit, you will explore the Chapel of St. John and, once again, the world’s only chapel built in tribute to John Paul II.

A majority of visitors to Krakow, Poland put Wieliczka on their sightseeing list – which is completely justifiable. Who wouldn’t like to get familiar with the history going back 700 years and find out how the process of mining changed over the centuries? Who wouldn’t like to learn about the generations of miners who worked gruelling hours to extend the mine’s structure and source salt to support their country’s economy? Thanks to the enormous artistic heritage they left behind, a visit to Wieliczka is even more of joy. Whether you’re history enthusiast or an adventure seeker, the mine has a lot to offer and will definitely make your stay in Krakow an unforgettable experience.