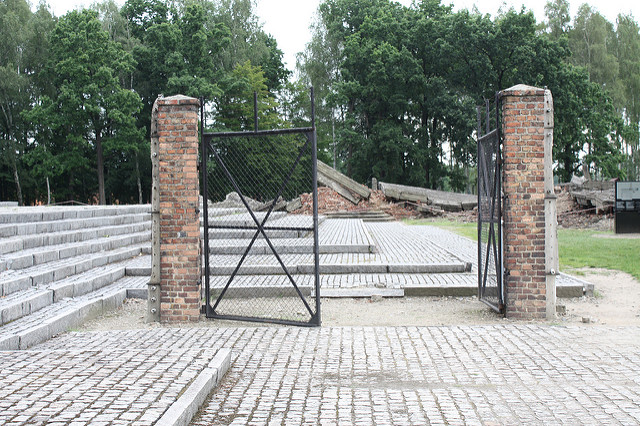 The Auschwitz Camp is one of the most frequently visited places in Poland. Every year millions of tourists from the country and abroad come here to meet one of the darkest pieces of human history. Auschwitz I and Auschwitz II Birkenau are very well-known. There are not many people who haven’t heard about “Block 10” in Auschwitz or the crematories and railroad ramp in Birkenau. However the Nazi extermination camp in Oswiecim has one more part. Maybe the most important one.

IG Farben – German factory in Oswiecim
Auschwitz III Monowitz was one of the first and the biggest sub-camps of KL Auschwitz. At the beginning it was to become a factory for the German company IG Farben located in Oswiecim, which had been producing synthetic rubber and liquid fuel. Authorities of the company decided to benefit from the nearness of the Auschwitz camp and they signed a contract with the SS which allowed them to use prisoners as a cheap labour.

In the first period prisoners were working at the construction of the factory. Later they built barracks and created their own prison. People who worked in Auschwitz III Monowitz were brutally treated. IG Farben management employed special commandos of guards and used the help of the SS who forced prisoners to work. Within about 3 years of the Auschwitz III operation, management was still complaining about poor performance of workers. Beating and other punishments weren’t able to make them work harder. Even introducing a system of rewards didn’t entice them. As a reward Germans gave them permission to wear watches, have longer hair, gave them bonds for cigarettes and other trifles. They didn’t realise that the main reason of poor performance was due to hunger…

Prisoner’s sketch of the factory

Due to the forced labour in Auschwitz III Monowitz about 10 thousand prisoners died. Furthermore, they were tortured to death by guards. Those who weren’t able to work any longer, were transported to Birkenau and murdered in gas chambers or by Phenol injections to the heart. It’s really hard to say what was worse, to die immediately in a gas chamber after the transportation to the camp or to be tortured, live in inhuman conditions and work as a slave.

Auschwitz III Monowitz is the most obvious proof that the power of Third Reich was built upon suffering and slavery.

One thought on “Auschwitz III Monowitz – Forgotten part of the camp”