Incredible Story of Escape from the Auschwitz Camp

20th June of 1942, another day in Auschwitz. Prisoners working, missing families, suffering and dying. Four of them made it definitely a day to remember.

Kazimierz Piechowski, a political prisoner (he was a member of Polish Boy Scouts) at Auschwitz concentration camp, a young boy – Stanislaw Jaster, a priest Jozef Lempart and an auto mechanic from Ukraine – Eugeniusz Bendera accomplished something unbelievable. 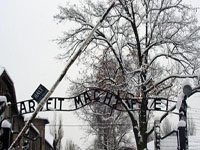 The escape was carefully prepared, however while waiting for the gate to be opened they got a little stressed… Then Piechowski, playing the role of Unterstrumfuhrer, yelled at the guard and hassled him to raise the bar. Thanks to the self control and fluent German of Piechowski they managed to quit the camp farewelled by an armed SS-men.

Reportedly, when the commandant Hoss heard about the escape, he asked astonished: “How the bloody hell could they escape in my own car, in our own uniforms and with our ammunition?”

As all escape attempts in concentration camps, also this one had its consequences. Nazis imprisoned the parents of Jaster, as well as Lempart’s mother and tortured the kapo Kurt Pachala, who was later starved to death. Another result was an order to tattoo the prisoners with their prison numbers. 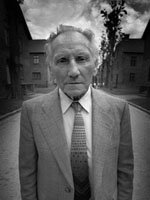 Nonetheless, not everyone considered this escape as an act of courage. There is a theory, that Stanislaw Jaster has collaborated with Germans, and managed to organise the escape thanks to his contacts. Found guilty for treachery and sentenced to death, he was killed by members of Polish Home Army. Kazimierz Piechowski never doubted the innocence of his friend and called this sentence “one of the biggest mistakes of Polish Home Army”.

Piechowski was never recaptured by Nazis, but during the communist era he was sentenced to 10 years in prison for being a member of the Home Army.

Lempart gave up priesthood and started a family. He died in an accident in 1971. Bendera lived in Warsaw and died in the 80s.

If you want to learn more about the amazing story of four runaways, we recommend you to watch “The Runaway” filmed in 2006 by Marek Pawlowski.

Piechowski as an inmate at Auschwitz
Other stories:

(…)Gas chambers and crematories could kill and remove the corpses of up to 4.5 thousand people a day(…)

(…)smuggling them hidden in a postal package, in a suitcase, in an ambulance, guiding them through the sewer pipes(…)