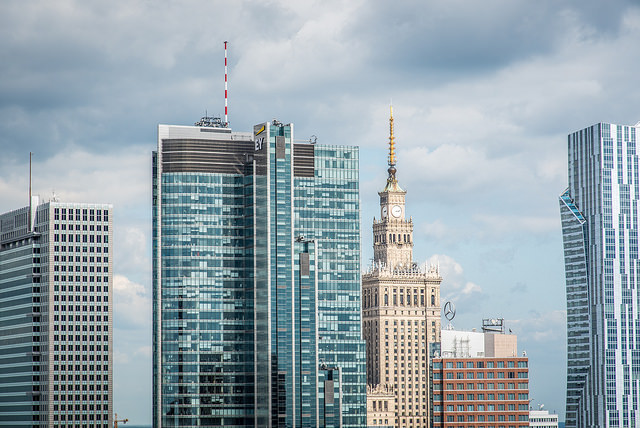 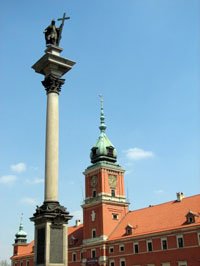 One day is firmly not enough time to see even most important sights of Warsaw. We recommend you to prepare a little bit more time, for Polish capital city sightseeing. There are few places that you absolutely have to see. To be in Warsaw and not to visit these places is simply a crime! To help you find out what to see first, we present those most important ones below.

The greatest sample of Warsaw’s glorious past. This is the best place to start sightseeing of our capital. We can find here such important monuments like Royal Castle, Sigmund’s Column or Monument of Mermaid which is linked to the legend about the beginning of the city. 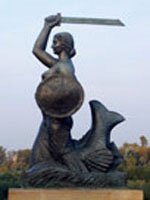 It says that long time ago, when at this territory was only a forest, on the Vistula bank lived a fisherman called Wars. He liked fishing at night, when river was very peaceful. Once he meshed a beautiful mermaid. Terrified creature started to sing and her voice was so beautiful, that fisherman decided to release her. In addition he fell in love. Mermaid also liked honest Wars. Like in most of legends they married and lived long in happiness. The name of mermaid was Sawa. On the place where they met each other the city Warszawa (Warsaw) was founded.

Old Town is full of other interesting legends as also magnificent architecture. It is worth to meet them all while visiting Warsaw Old Town. 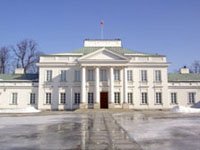 Royal Bath Park was favourite place of king Stanislaw August Poniatowski. It’s no wonder, because this complex of beautiful buildings, water and greenery is simply one of its kind! Monuments erected by the most famous architects of 18th century can marvel not only a history and architecture lovers. It’s also ideal place for Sunday stroll with family, that’s why Warsaw inhabitants appreciate it so much. 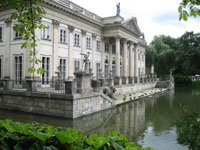 Among the alleys of Royal Bath Park you can find such marvellous masterpieces of architecture like Palace on the Water, Orangery or Belveder – former seat of Polish president. Very important sight of the park is Monument of Frederic Chopin. Under this unique statue we can often listen to the brilliant piano concerts which commemorate our famous composer.

If you want to get some rest of the city noise and see one of the most beautiful place in Poland you have to visit Royal Bath Park. This is totally must-see for every visitor in Warsaw.

Palace of Culture and Science 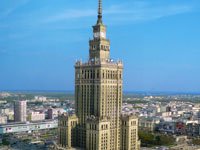 Most famous remain of communism era in Poland. The great gift from our soviet friends or if someone prefer other point of view, the symbol of slavery. Warsaw inhabitants love it or hate it. Almost no one have indifferent attitude to this monument, but there is one thing sure, nowadays nobody can imagine Warsaw without Palace.

Opponents of Culture and Science Palace joke, that the most beautiful view of Warsaw is from the top, because you can’t see it. We don’t think that it’s so ugly. Monumental, a little bit inelegant architecture makes this object really interesting. In addition there are a lot of cultural institutions like theatres, 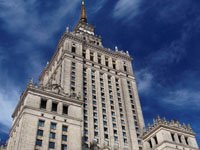 museum or Congress Hall where a lot of important events had place. One of the most famous was Paul Anka’s concert in 1963, which was stopped by the artist because of president Kennedy’s assassination. This place is filled with such interesting episodes.

To be in Warsaw and not to see Culture and Science Palace is simply a sin. Everyone should see it and form his own opinion about this controversial monument.

In the years 1677-1696 Polish king, Jan III Sobieski, according to the project of Locci Augustine erected in Warsaw’s Wilanow Baroque palace. Successive owners of the residence Wilanów extended its side wings. 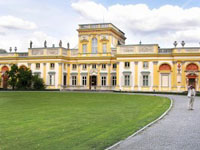 The Palace as one of the few monuments of Warsaw, together with the surrounding monuments and park, survived the times of partition, war and occupation. At the same time, it did not lose its historical and artistic values, and is now one of the most important monuments of Polish national culture.

The Palace and park in Wilanow is also a place of numerous cultural events, concerts and meetings. There are held: the International Summer Academy of Early Music or Royal Summer Concerts in the ROSE Garden.